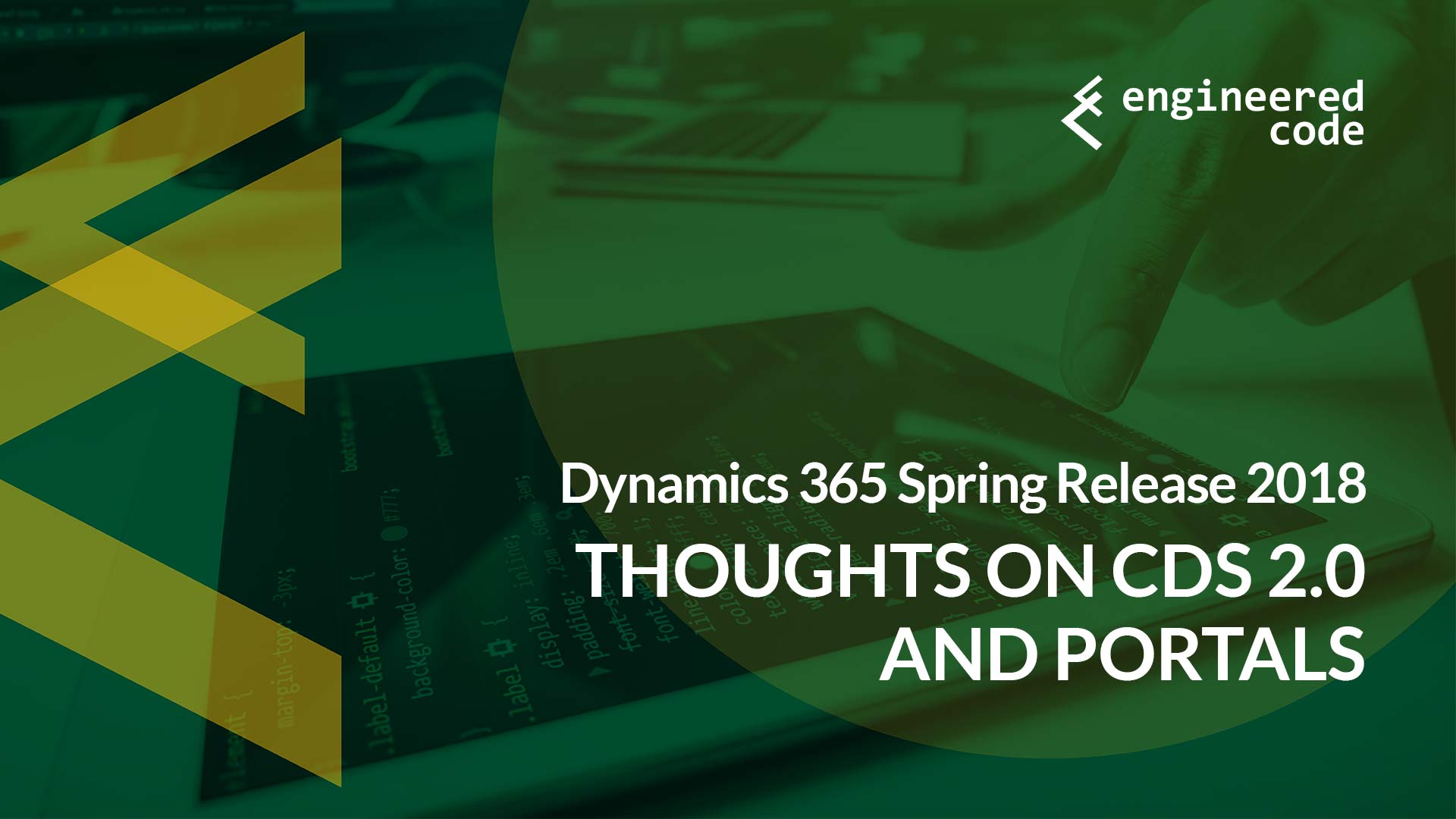 Last month Microsoft unveiled the Spring Release 2018 of Dynamics 365. While there were a lot of interesting items in the announcement (Marketing, Embedded Intelligence, PowerBI Insights apps), the one that I’m most excited about is the latest release of Common Data Service (CDS), version 2.0. In this post I’ll provide my thoughts on this latest update, as well as what it might mean for the Portal capabilities of Dynamics 365.

The original purpose behind CDS was to provide a way to integrate the various Dynamics products with each other, as well as other systems. In it’s simplest form it was essentially as a stand alone SQL database with features that made is easier to pull data from and push data into these systems. This central database has tables that are common across most business applications, like Accounts and Contacts. For example, when attempting to integrate a Dynamics 365 for Customer Engagement (D365CE) instance and a Dynamics 365 for Finance and Operations (D365FO), the Accounts table could have fields for company name, billing terms, and support contract level. The D365CE instance would be considered the main source for the support contract level, and so it would push that data into CDS, and the D365FO instance could pull that field and have it as a read-only field for easy reference. The billing terms field could be setup in the exact opposite way.

PowerApps, a Microsoft technology allowing users to build native mobile applications with little-to-no code, was primarily based on CDS.

While the original purpose of what is now D365CE (formally Dynamics CRM, formally Microsoft CRM) was Sales, Marketing and Service, for years now the community has been using the flexibility of the product to build all sorts of applications. D365CE is a great platform because it is easy to create new entities, add fields, and features like workflows and plugins allow you to model even the most complex business processes. At Engineered Code, we’ve used it to build a provincial registry for lobbyists, a job board and recruitment tool for the health care sector, and a regulatory database for the oil and gas sector. None of these fall under those traditional CRM scenarios.

Using D365CE for non-CRM projects is known as xRM, where the X is meant to stand for “anything”, as in “anything relationship management”.

With the Spring 2018 release, you will no longer have to worry about integrating your CRM database with the CDS database – because they will now be the same thing!

Microsoft has been talking about splitting the “platform” away from the “applications” for a while now. Those of us building xRM solutions have been hoping for a way to leverage all the great platform functionality without needing to include functionality we didn’t need for the project. We were also hoping to get a lower price point for those licenses, since we aren’t using a lot of the built-in features of the CRM-specific (Sales, Service, Field Service, and Project Service) applications. CDS 2.0 is exactly that.

Users upgrading to CDS 2.0 will essentially have a D365CE instance with only the most basic types of records. All of the great extensibility options are still there – you can create new entities, add fields, etc. In fact, people using a more traditional D365CE instance will see that the area we’ve used for years to make these configuration changes has been rebranded to PowerApps, a nod to the fact that it really is using CDS 2.0.

Unfortunately at this point there has been no news on what this means for Portals. As far as I know, Portals continues to be an offering included as part Dynamics 365 for Customer Engagement; anyone developing using just CDS won’t have the ability to deploy a Portal.

I really hope this changes at some point. I see huge potential for Portals implementations in projects that don’t fall into one of Customer Engagement offerings. The Portals offering, which began as Adxstudio Portals, was itself a great example of a third-party XRM offering. Knowing how it is built under the hood, I don’t think it would take a monumental effort to move Portals from being a Customer Engagement product to being available for users on the CDS-only SKU. Here’s hoping that this happens sooner rather than later.